Shaking the sleep from our bones the next day, we woke to a table of fresh fruits, poached eggs, and café. The yellows, oranges, and pinks of the spread cheered the room with a warmth that rivaled our casa particular’s. Fresh and in season, the food made our our taste buds sing in an octave that American supermarket produce never could.

We would stay one more night in Havana, then set out west to Viñales in the Pinar del Rio region, where we’d find residence in a small town among the fields where world’s best tobacco is cultivated. Setting out in search of a bus terminal, we left home to post ourselves in the middle of a busy street to hail a taxi. Several cars — none of which were state-run — stopped for us, but they all asked for prices we knew were too high. Eventually, we forfeited the attempt and resigned ourselves to finding the way by foot (like any good adventurers should).

Despite our lack of success, hitching rides is incredibly common in the country; anyone with a car can be a taxi driver. Picking up passengers gives Cubans a quick way to make money that presumably doesn’t get reported to the state. It’s easy to see that for the average citizen, the two greatest potential earning sources (especially via tourists) arise from owning a car or a casa particular. By providing taxi services for locals and foreigners alike, car owners can easily make a few extra MN or CUC. The state claims a portion of casa particulares revenue, but the ability to rent a room (or several) a few days a month can easily multiply a Cuban’s salary. This extra income opens up previously-closed parts of society, such as the CUC-driven restaurants or industries financially biased towards tourists.

The standard of living in Cuba is modest but varied. The average monthly salary is about 25 CUC/ month, which is enough for an individual but does not go far with a family. All citizens are issued a small book called a libreta, which provides enough food to ensure a basic level of nutritional intake. Jobs are guaranteed to those who want them, which can have a predictable effect on worker motivation and productivity. Some workers choose to forfeit their training and do what they’d like (we were told a story of a woman who left six years of schooling to try to sell fruit juice on the streets, dropping her earning power to about 0.5 CUC/ day). As a socialist country, the state also provides its citizens with free access to education and healthcare. Schooling is mandatory until age 17, at which point students may continue into higher education, tuition-free, in one of ten all-encompassing industries, if they agree to spend their first two years of post-grad life providing minimum wage, state-organized service in their field of choice. Cubans like to brag about their healthcare system and international renown of their doctors. Once commenting on the absence of the homeless on the streets, I was impressed to learn that in urban areas, a nightly trio of a doctor, nurse, and cop will make their way around the city, rounding up anyone in need and bringing them to a hospital for a bed, some food, and any needed care.

We adventured southwest toward the bus terminal through, parks, a market, and several pop-up baseball games. Outside the terminal, packs of taxi drivers stood around offering, “taxi, amigo?” It was hard to go anywhere in the city without receiving this enticing proposition; wandering gringos are usually assumed to be lost gringos. When these attempts fail with me, one driver turned to my girlfriend and asked, “taxi, baby?” (In other parts of the city, almost as frequently, we’d hear, “cigar, amigo?” or “mojito, amigo?”). In the terminal, we learned that there was a bus departing at 9am the following morning. They weren’t selling any more tickets, but assured us that if we arrived by 8am, we’d be able to purchase them then. I made a move for the men’s room before leaving, and was intercepted by a woman in the doorway. Wordlessly, she rubbed her palm with her fingers to indicate that I had to pay. I left to find a bathroom outside, in the great outdoors. There’s something about paying to pee that I just can’t get used to. 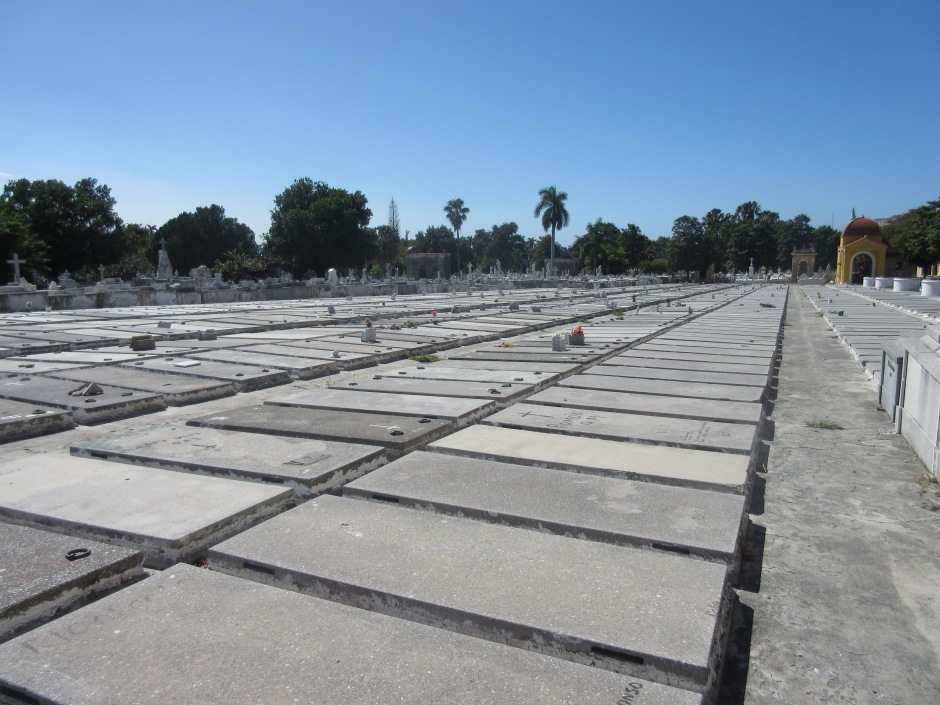 Adjacent to the terminal was a large public zoo that we were able to enjoy by strolling along the chain-link fence. We followed the perimeter until we had to pick a street, we eventually found a large graveyard called El Cementario de Cristóbal Colón. The site was sunny, serene, and almost vacant. Among the tombstones and monuments, we passed a man in front of a tombstone with a cross, who had lit a series of candles and arranged coconut shells. He chanted in a language we hadn’t yet heard. Pausing for a moment, we realized that he was practicing a ritual of Santería, a syncretic religion that combined West African traditions with the guise of Catholicism, having been forced underground by cultural hostilities earlier in history. We stood at a distance and observed the man quietly for a moment, feeling like witnesses to something intimate.

The neighborhood of Vedado was different than other parts of the city: the feel was more suburban here, with lawns, and wide, clean streets. Later in our trip, we’d prefer staying in this district: with a higher concentration of wealth and a lower concentration of tourists, the area was safe, genuine, and had some of the best food. Our culinary tour of the area began with a place called El Carmelo, a Charlie Chaplin themed restaurant. The Cubans have a fixation with the silent-film era actor that rivals the tribute their vehicles pay to the earlier century. The place offered some of the most professional service we’d encounter in the country, and we enjoyed juice, soup, rice, beans, and sautéed vegetables for about $4.50.

After lunch, we found a Casa de Cambio, and exchanged our Euros for CUC, and then some of our CUC for MN, having determined that the best way to tour the country would be with a mix of both currencies. This strategy greatly facilitated the ease of transaction with locals who attempted to take advantage of the duel-currency confusion, which, predictably, was more prevalent in Habana Vieja and other touristy areas. The transaction was documented and required our passports. Looking at my mine, the teller quickly asked: “El Presidente Trump?” “Es un pendejo.” He laughed; apparently, the man was a complicated character down here, too.

Havana Harbor rose at the north end of Vedado, Along the road ran El Malecon, a stone wall separating the bay from the city. On its south side was a pedestrian walkway that boarded the city’s only highway; to the north, a platform of water-soaked rocks that crashed into the sea. It was short, but expansive: at waist-height, the perfect perch was inclusive to all in the city. Around sunset, people left their jobs to convene along the wall. Friends met up with friends to relax and stretch out, as street vendors strolled by pushing the carts of assorted juices or crispy treats. Young and old, local and foreign, this was the unspoken ritual to ending a day. Strolling at their side, we had found ourselves among them, leaving behind the day to ease our sores out by the water.

That evening, we refreshed ourselves at home with showers and rum, then headed out to dinner in Habana Vieja. After delicious ropa vieja, we made ourselves at home on the steps of an old cathedral and watched the visitors of the city, chatting happily in their many tongues, until a small kitten strolled by and it soon made itself at home on my girlfriend-the cat-whisperer’s lap. We smoked our first Cuban cigar and then headed to La Floridita, an old haunting ground of Hemingway, for frozen daiquiris and live music, then left for bed. Although we were sad to leave our new feline friend behind, we knew it’d soon find itself another pair of good hands.